We specialised in high-precision geochronology and isotope fingerprinting for the minerals and energy sector, and an improved uranium-lead geochronology for resolving geological events in time and space.

Our TritonTM TIMS instruments features a multicollector system consisting of nine Faraday cups and a secondary electron multiplier, multiple ion counting, and a 21-sample turret. The isotope dilution technique used is a ‘definitive’ method of analysis producing highest achievable accuracy and precision. TIMS represents the gold standard for isotopic analysis, reaching a precision of 0.001% on isotopic ratios. The history of TIMS-based research at Curtin can be traced back to the 1960s, when the isotope study group carried out Rb-Sr and Lu-Hf chronological studies. The facility has recently installed a Thermo Scientific TritonTM mass spectrometer, facilitating a new range of geochemical, geological and environmental research applications. 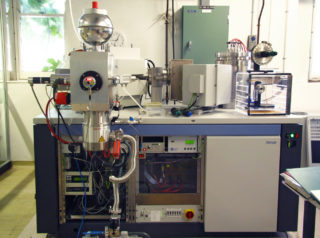 The TIMS instrumentation, in combination with isotope dilution methodology, is widely used in chemical metrology for the calibration of isotopic standards, and the calculation of isotopic abundances and atomic weights. 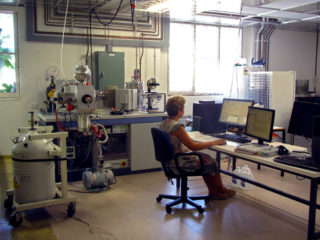 The TIMS Facility at Curtin University has contributed to accurately measuring the concentrations of various elements in international reference materials. The currently accepted atomic weights of Cd, Te and Sn are based on measurements made at Curtin. The present applications of TIMS are mainly in the broad field of geochronology involving Re/Os, U/Pb, Pb/Pb and Sm/Nd isotope systems, and in isotope fingerprinting in the study of ore- and petroleum formation processes. 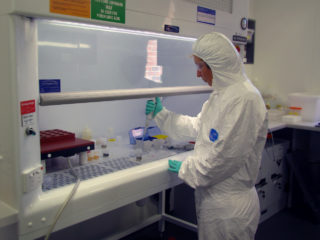 Sample preparation and chemical separation of elements is carried out in the recently purpose-build Acid Digest Laboratory with clean air environment designed for ultra-trace analyses. It is equipped with ULPA-Filtered air to reduce particle levels, ducted fume cupboard and deionized distilled ultra-pure water. 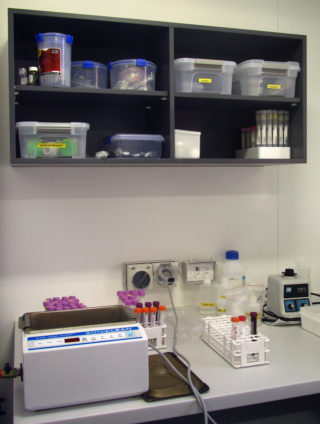 The Clean Lab represents the latest evolution in the design of clean labs for processing ultra-trace amounts of heavy metals.

The present applications of TIMS are mainly in the broad field of geochronology involving Re/Os, U/Pb, Pb/Pb and Sm/Nd isotope systems, and in isotope fingerprinting in the study of ore- and petroleum formation processes.

Improving Exploration Success by Re-Os Dating of Ores and Oils

Pilot Re-Os study on crude oil samples from Canning basin in Western Australia (WA) has been performed in order to test the suitability of Re-Os isotope system for geochronology and sources fingerprinting. The samples come from Dodonea, Sundown and Blina fields within Canning basin. The reservoir ages for these fields range from Ordovician to Carboniferous. The asphaltene fraction was extracted from crude oil samples in order to pre-concentrate the Re and Os, and then these fractions were used for Re-Os chemistry using Carious tube technique, followed by N-TIMS analysis.

From twelve samples of WA oil studied, only three returned the results because of quite low Re-Os abundances in separated asphaltenes, in a range of up to 1 ppb for rhenium and tens of ppt for osmium. This is quite low compare to Canadian oils, which usually show about an order of magnitude higher abundances of these metals. Higher Re and Os contents in Canadian oils correlate with markedly higher nickel and vanadium abundances.
Our preliminary data show a good fit with the basin ages using geologically reasonable initial Os ratios varying from depleted mantle-like ratio of 0.12 for Ordovician samples to the more evolved ratio of 0.4, corresponding to the Os isotopic composition of Late Devonian seawater. Interestingly, the Ordovicial oil from Canning basin show more depleted source according to carbon isotope composition (~-31‰δ¹³C) as well, trending towards more enriched marine compositions for Devonian-Carboniferous parts of the basin (-27 to -29‰δ¹³C). As a conclusion, the study involving more samples shows a good potential for both geochronology and source fingerprinting of WA oils.